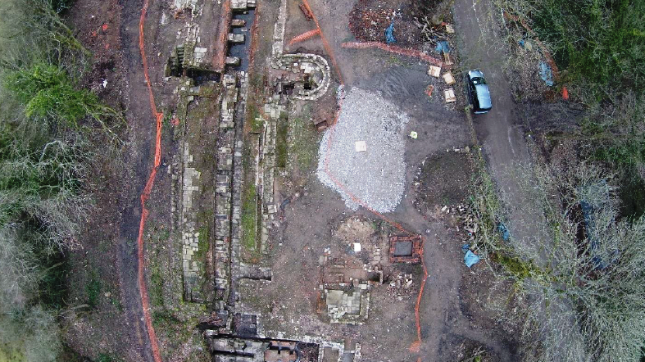 Hi All,
Great news. We finally have been granted planning permission for the landscaping works at Mellor Mill. Contractors are on site starting the works.

The Stockport Metropolitan Borough Council hereby give notice in pursuance of the Town and Country Planning Act 1990 that FULL PLANNING PERMISSION HAS BEEN GRANTED for the carrying out of the development described above. The development must be begun not later than the expiration of THREE YEARS beginning with the date of this permission, as required by section 91 of the Townand Country Planning Act 1990 and amended by Section 51 of the Planning and Compulsory Purchase Act 2004. 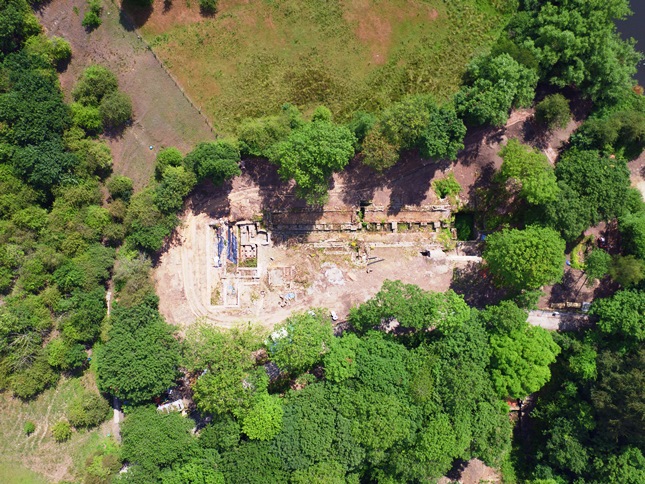 Landscaping Progress at /Mellor Mill - We are nearly there (two views from 400 feet)
After being successfully granted full planning permission contractors are now hard at work carrying out the conservation, consolidation and landscaping at Mellor Mill.  With the project due to end on 31st August 2018 the timescales are very tight but we are assured by the contractor achievable.  The recent spell of wonderful summer weather has helped to keep th 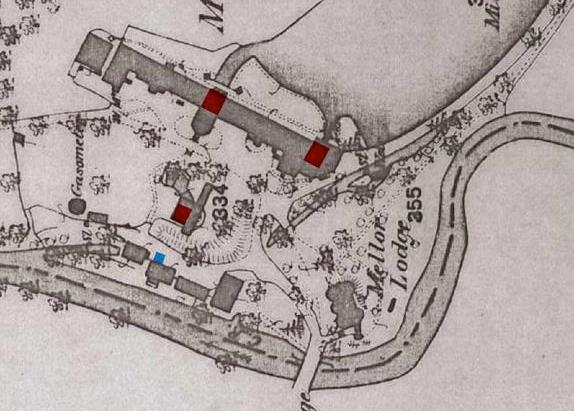 e works to schedule so I expect us all to be able to enjoy a stroll around the new pathways, read the interpretation boards and get the Oldknow’s App up on our smartphones to see what the mill looked like in its prime.  By standing at certain points around the site not only will you be able to see the mill but also the Wellington Water Wheel, The Mill fire and a rear view of the mill as well as listening to various audio commentaries.  It’s hard to believe that all this started way back in 2011 and finally we are almost there.  A huge THANK YOU has to go out to our many volunteers who never wavered in their belief that one day we would have our Mini Country Park to show off to visitors.  Well done everyone who has, in any way been involved in this fantastic project.  Of course, once finished, we will need to look after the site which we have leased for 25 years.  There is an opportunity now to become part of a Mellor Mill Friends Group and contribute to its upkeep.  If you are interested in helping in any way please contact me at:  This email address is being protected from spambots. You need JavaScript enabled to view it.

from Bob's Mill Diary, Sunday 29th September 2013: At the end of July we found ourselves starting to excavate at the northern extremity of the main Mill complex.This is the boiler house and the steam engine house. A building, constructed in 1860, which is detached from the main Mill, housed the Lancashire Boiler and two horizontal steam engines, manufactured by Goodfellows of Hyde. We started to investigate the depression where the building once stood but now was only showing the top few inches of the long engine holding down bolts above the debris and dense undergrowth. 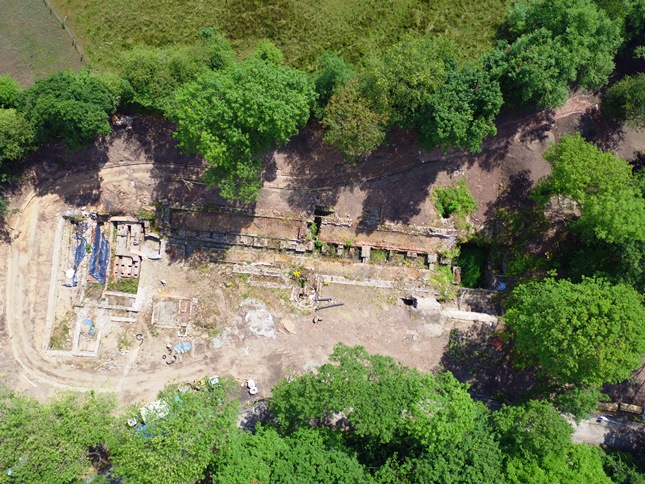 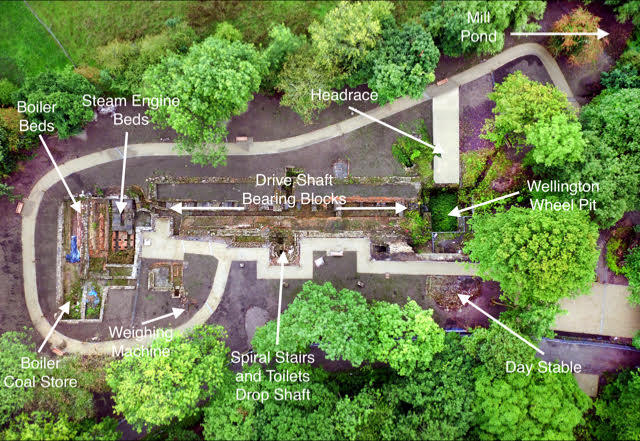 The Latest Aerials from Mellor Mill, landscaping completed with some hedges to plant in the Autumn and the interpretation boards to go up in a couple of weeks.

In April 2011, the Trust was awarded £15,000 from the Association for Industrial Archeology, which with £5,000 from the Trust will be used to uncover the Wellington wheelpit for public view. Bob tells the story of the wheelpit, the continuing excavations in front of the mill and the bid to the Heritage Lottery Fund to open up the whole of Oldknow's industrial complex. 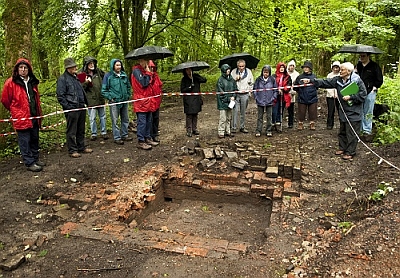 Now that we have finally finished the landscaping at Mellor Mill and created a facility for everybody to enjoy I need to apply myself to how we are to maintain the site into the future so that it doesn’t get taken back by nature. A Maintenance Schedule which has been developed by Mellor Archaeological Trust and our Landscaping Consultants.

I suggest that we should follow this schedule, to fulfil the volunteer activities, by starting as soon as possible. We will have our first volunteer day on Saturday 29th September 10am to 4pm.

Please do come along and help us keep this local asset looking good. This first event will focus on weeding and the clearance of materials left by contractors. 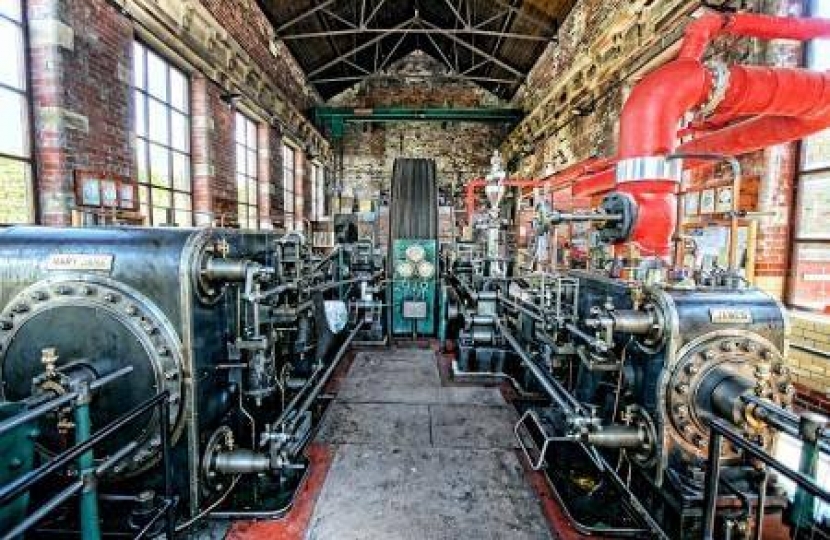 A really successful trip was taken today to the Bancroft Mill in Barnoldswick.
The mill stopped production in 1978 and was subsequently demolished. However, the engine house, chimney and boilers have been preserved and maintained as a museum. The engine is very similar to the on which was installed at Mellor Mill.
8 members of Mellor Archaeological Trust visited today to witness the engines in steam.

A credit to all the volunteersworking there.

Bancroft Mill Engine Trust is an independent registered charity. It was formed in 1980 to preserve the industrial heritage of the last working steam mill engine in the area.

Bancroft is a working museum open to the public with free entry most Saturdays throughout the year from 11-3pm. Guided tours are normally Saturdays depending on the avaialbility of volunteers. There is no fixed charge for these but would ask you to make a modest donation to the Trust. Alternatively you may conduct yourselves around the site. The museum is also open and the engine in steam between 1pm and 3.45pm on many Sundays from March through to early December when tours also operate. Check the link to Steaming days for the full list. more