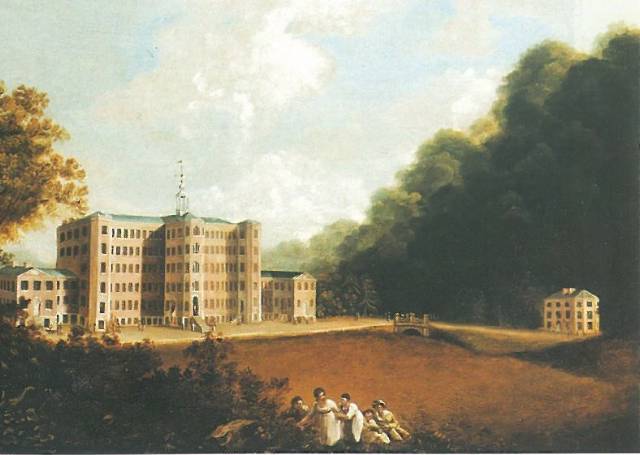 For many years an engraving based on a painting of Mellor Mill graced the Council Chamber of Marple UDC. Since the move into Stockport, it has hung in Marple Library. The original painting is by the famous Manchester artist, Joseph Parry (1744-1826). In 1997, it came on the market at a Sotheby’s auction.  The painting was later bought from a dealer by Sean White. In December 2012, through the initiative of Mark Whittaker of The Marple Website, Sean brought the painting to be seen by a group of Trustees. For personal reasons, Sean wanted to sell the painting, but hoped that it could go to where it belonged, Marple and Mellor. He offered it for sale to the Mellor Archaeological Trust for £3,500. As a temporary measure, the painting was then bought by John and Ann Hearle and an appeal was launched to enable the Trust to acquire the painting. With the agreement of the librarian, the painting will be hung in Marple Library, where it can be seen by all and will show one of the major works of Samuel Oldknow, the man who more than anyone else turned Marple from a small hamlet into the place we know today.

With donations of £1,750 from the Coop Community Fund, £500 from Stockport Council through the Marple Area Committee, £500 from the Mellor Society, and many other donations from organizations and individuals, over £4,000 has been raised. This has enabled the Trust to buy the painting and also covered other expenses, insurance, mounting and providing an explanatory plaque in the library, etc.

The painting was examined by Gillian Walker, who specialises in conservation and restoration of easel paintings. The painting is generally in good condition, though it has had some retouching. Varnish has been cleaned from the sky, the mill and the children in the foreground, but not from the trees on either side. It is interesting that the foliage is clearer on the engraving than on the painting. Gillian also cleaned and replaced the varnish, which greatly improved the appearance of the painting, and carried out other restoration. Her full report is further down the page.

The painting was finally unveiled to the public during a brief ceremony on Saturday 15 March 2015.

The story of how the painting found its way back to Marple was told by the Trust's John Hearle, then, after an introduction from the Mayor of Stockport, Cllr Kevin Hogg, Mark Whittaker of The Marple Website pulled the cord to reveal the painting in its new location in Marple Library.

Conservation and Restoration of Easel paintings 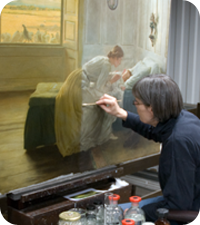 VARNISH LAYER:  The painting appears to have last been restored in the 1970s, approximately.  At that time, an old, yellowed varnish layer was removed from selected areas: the sky, the mill and the group of figures in the foreground. However, it was left in the remaining areas of the painting (the trees in the right-hand side, the tree on the left-hand side and the foreground). This was confirmed when the painting was examined under an ultra violet light: the remaining areas of varnish fluoresced quite strongly, whereas the “cleaned” areas showed no fluorescence.

There were several slightly discoloured retouchings in the painting, which showed up dark under U.V. light, and were also visible under normal light. The largest of the retouchings was in the centre of the sky, and from its angled shape, appeared to be the repair of an old tear. The other retouchings were in the foreground below the small house on the right-hand side; the lower right corner; the centre foreground, above the figures. 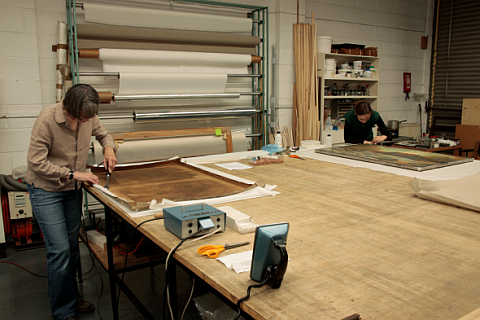 PAINT AND GROUND LAYERS:  The ground (priming) layer is a dark cream layer of oil-paint which can be seen on the original tacking edges. The paint layer has been applied as a moderately thick layer, with shallow impasto in the white parts of the clouds.

The paint layer has been flattened by both the lining processes (see below), but the pattern of structural cracking is still evident throughout the painting. The cracking, which formed before the painting was lined, is fairly irregular in the area of the sky, and more regular in the dark areas of the trees and foliage. There are stretcher bar cracks on all sides, which would also have formed before the painting was lined; they are located above the inner front edges of the strainer. The cracks correspond precisely with the width of the bars of the strainer, indicating that the strainer is original to the painting.

There is an area of small, closely spaced drying cracks in the dark tan area of the foreground in the lower right side, to the right of the figures. These would have formed during the first years after the completion of the painting, and are usually caused by an excess of medium in the paint layer.

SUPPORT:  The original support is a medium, plain weave, linen canvas. The original tacking edges have been retained, although there are numerous losses along the edges, where they evidently rotted away due to rusting of the original ferrous tacks. The painting has been lined onto a cotton duck canvas (which is off-white in colour), using a wax-resin adhesive. It was at first thought that prior to the present lining, the painting might have been lined on an earlier occasion, with a flour paste glue adhesive, but the presence of the remains of the original tacking edges suggests otherwise. It was usual for the tacking edges to be removed before carrying out a glue lining, and very few paintings that were lined in the 19th century or earlier still retain their tacking edges. The tension of the painting is adequate, despite being attached to a strainer (see below) and it is unlikely to slacken, due to the presence of the relatively inflexible lining canvas and wax-resin adhesive.

STRAINER:  The strainer is of softwood; it is original and consists of four bars joined at the corners with half-lapped corner joints, which have been glued and (at a later date) nailed. The inner front edges have been rounded, in a rough manner. The bars are quite thin (1.3 cm approx.) A strainer cannot be keyed out, due to its fixed corner joints, but the painting’s support is adequately tensioned at present.

The tacking edges of the lining canvas have been folded round onto the back of the strainer, and stuck down with heat. A paper label with a hand-written inscription in ink stuck to the top bar. The paper is embrittled and has darkened with acidity. The inscription reads as follows:

FRAME:  The frame is of wood, with a simple moulding, gessoed and gilded. The gilding on the front 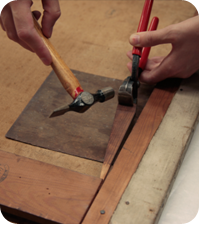 of the frame is original; it is in good condition, although it is slightly dirty. There are a few, fine structural cracks, especially on the top and right-hand rails; the cracks probably emanate from the wooden substrate. A softwood build-up has been added to the back of the original frame, and the outer edges of both the build-up and the frame have been painted with bronze pigment paint, to match the original gilding. There are a few small losses in the gesso along the front outer edges of the frame, exposing the gesso and the wood. Some of the earlier losses have been over-painted with the bronze pigment paint.

The painting was secured into the frame with four copper framing clips and the outer back of the frame and the strainer were covered with brown paper tape. The rebate of the frame is very rough, and has not been lined with paper or felt. There was no backboard attached to the back of the frame.