On the 28 February 2019 Mellor Archaeological Trust (MAT) ran the first of the UK STORM emergency drill testing the STORM dashboard and response application. A sudden-onset hazard scenario was tested. This took as its premise a severe weather event: Intense Rainfall which could lead to flooding at the Mill site.

Having seen the alert system on the STORM dashboard at 11:00 GMT, the Mellor site manager, Bob Humphrey-Taylor sent project officer Rob Williamson (team leader) to site to check for potential damage once the weather event had passed, who arrived at Mellor shortly afterwards. A rapid inspection of the site revealed fallen tree branches had blocked drainage from the drive shaft at the mill leading to flooding of a section of the shaft close to STORM Item “MAT 6.1”. A land slip close by was also noted. 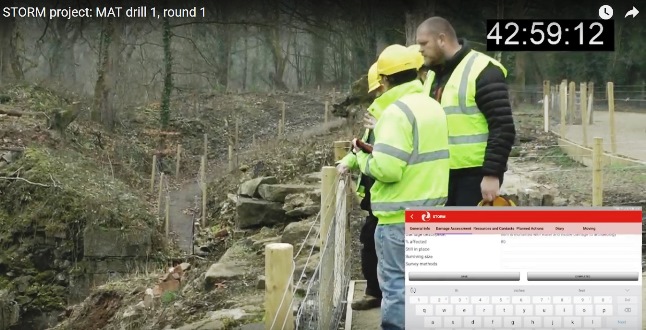 For the scenario, damage to some of the handmade bricks in the draft shaft area was observed, as was a landslip close to the main pathway into the site. The landslip demonstrated the potential of secondary hazards. Using the STORM emergency planning framework, available on the STORM mobile application, the first responder and team leader cleared visitors from the site and began the process of closing access to the mill site to exclude the public and cordoning off the damaged mill item, following the emergency response steps reported by the app. These actions were recorded in real-time on the STORM mobile application via an android tablet, which is a dedicated device for the first responder.

The site manager, still in his office, alerted all available volunteers and workers via a dedicated WhatsApp group and then called Adam Thompson at the Centre for Applied Archaeology at the University of Salford who agreed to visit the site at once in order to assess the damage to the mill item and advise the site volunteers. Adam also advised the County Archaeologist for the area (Norman Redhead at the Greater Manchester Archaeological Advisory

Service) of the hazard, who in turn promised to contact and advise the local authority (Stockport Council). Bob then arrived at Mellor Mill and set up a command and control point and took over the management of the hazard response.

After further inspection, Rob, Bob and the archaeologists from Salford University checked and followed the STORM conservation plans being relayed via the tablet and kept track of all actions undertaken utilising the diary, videos and photos. The next stage of the recovery operation was to clear the blockages in the mill to allow the water to drain. A volunteer group cleared the blocked drains under archaeological supervision from Adam Thompson, removing tree branches. This allowed for inspection of the damaged mill wall by Adam and Bob, further photographs then being uploaded on the STORM Dashboard.

Significant damage to brick work led Adam to suggest the wall be reinforced using sandbags until further analysis of the structure could be undertaken. Throughout the exercise the scenario was filmed, and the STORM mobile application used in real time (whilst being screen recorded) Despite the narrow valley location of the Mellor Mill site, a wifi connection with the tablet computer was possible, if a little slow using a hotspot to a nearby mobile phone. The ability to bring up data on the Mellor site, including the conservation plan demonstrated the great advantage of having the real-time hazard management system available to the Mellor Archaeological Trust.