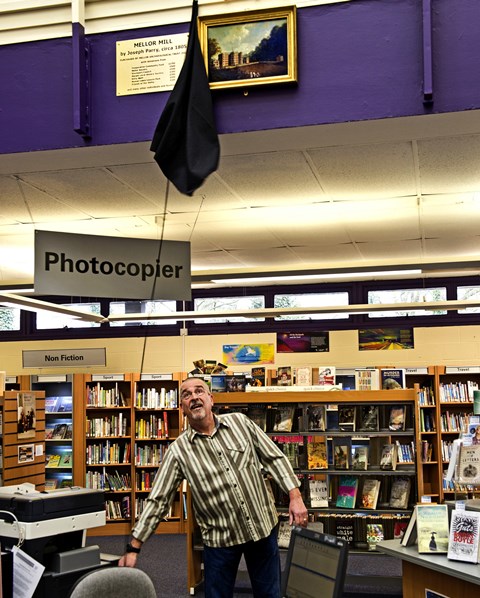 Unveiling the 1805 Painting of Mellor Mill

On Saturday, March 14, an oil painting of Samuel Oldknow’s Mellor Mill, was unveiled, which hangs high above the reception desk. A few years ago, Mark Whittaker, (left) who has done so much for the community by establishing the Marple Website, heard about this picture. Engravings had long been known, indeed one hangs in the library, but this was the original oil painting by the Manchester artist, Joseph Parry. In late 2013, Mark was told that the owner, Sean White, wanted to sell it for £3,500 and would be happy for it to come to Marple. As he wanted to sell quickly, the Mellor Archaeological Trust launched an appeal to raise funds to acquire it for the benefit of the community. The Cooperative Community Fund started the ball rolling by paying half the cost of the painting. The SMBC Area Flexibility Fund provided £500 and as did the Mellor Society. Other support came from four local organisations and from over 20 individual donors. This not only covered the cost of the picture but paid for conservation and insurance.

At the unveiling, Professor John Hearle, Chairman of the Trust, told the story of the acquisition of the painting. This complements the excavation of the remains of the mill, which was burnt out in 1892, as part of the HLF-supported project “Revealing Oldknow’s Legacy: Mellor Mill and the Peak Forest Canal in Marple”, being run jointly with Canal and River Trust. The Mayor of Stockport, Councillor Kevin Hogg, welcomed the display of the picture of the largest cotton mill in Stockport, indeed in the world, when it was built in 1790-92, so that it can be seen by the local community. He then asked Mark Whittaker to pull the cord and open a view of the picture and its accompanying plaque. 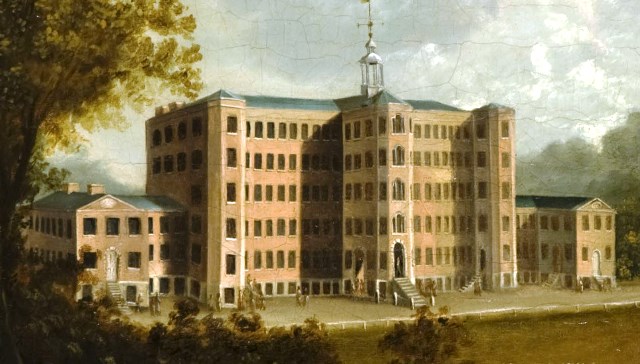